Independence Day in The Villages FL 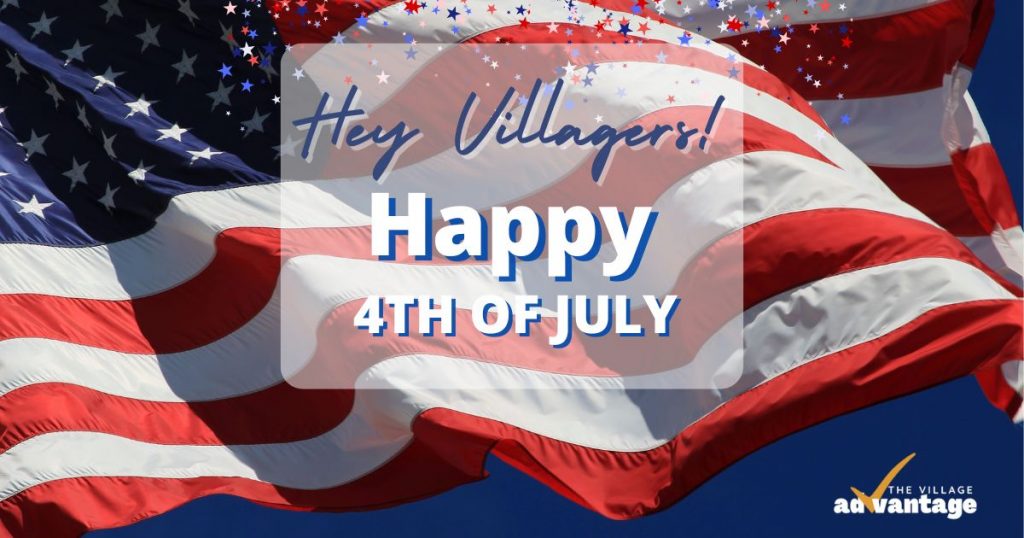 Independence Day in The Villages FL

Americans come together on July 4 to celebrate the nation’s birthday and Independence Day. On this day, most Americans enjoy grills in their backyards, at beaches, or in parks.

Some partake in parades or marches and enjoy the fireworks that are often launched at dusk. We kick off the festivities with details, trivia, and anything else you need to know about Independence Day. Happy Fourth!

Although most of us already had this history lesson in school, we probably weren’t really paying attention as the clock ticked closer to recess or the end of the day. But we can’t fully appreciate our freedoms if we don’t know how we got them — and, more importantly, how close we came to losing them. The story of America’s independence is truly fascinating with more historical twists and turns than we can possibly get into here. But at least we can get you started with the basics.

In the 1700s, America wasn’t really a nation of ‘united states.’ Instead, there were 13 colonies with distinct personalities. From 1763 to 1773, Britain’s King George III increasingly placed pressure on the colonies as he and the British Parliament enacted a succession of draconian taxes and laws on them. Excessive taxes on British luxury goods like tea and sugar were designed to benefit the British crown without any regard for the hardships of the colonists. By 1764, the phrase “Taxation without representation is tyranny” spread throughout the colonies as the rallying cry of outrage.

The more the colonists rebelled, the more King George doubled down with force. Imagine if enemy soldiers not only had the right to enter your home but the soldiers could demand that you feed and house them. The Quartering Act of 1765 allowed British soldiers to do just that.

But the Stamp Act of 1765 became the straw that broke the colonists’ backs. Passed by Parliament in March, this act taxed any piece of printed paper, including newspapers, legal documents, ships’ papers — and even playing cards! As the colonial grumbling got louder and bolder, in the fall of 1768, British ships arrived in Boston Harbor as a show of force. Remember, the British Navy dominated the seas all over the world due to the far-reaching presence of the British Empire.

Tensions boiled over on March 5, 1770, in Boston Harbor during a street fight between a group of colonists and British soldiers. The soldiers fired shots that killed 47-year-old Crispus Attucks, the first American and Black man to die along with three other colonists in the Boston Massacre.

In 1773, the Boston Tea Party (from which today’s Tea Party Republicans get their name) erupted when colonists disguised as Mohican Indians raided a British ship, dumping all the tea overboard to avoid paying the taxes. Continued pressure led to resistance and the start of the Revolutionary War in the towns of Lexington and Concord when a militia of patriots battled British soldiers on April 19, 1775. Conditions were ripe for American independence.

When the first battles in the Revolutionary War broke out in April 1775, only a handful of colonists wished for total independence from Great Britain, and those who did were considered extremists.

However, halfway through the following year, many more colonists had come to lean more toward independence, as a result of growing hostility towards Britain and the spread of revolutionary views like those conveyed in the bestselling pamphlet published in early 1776 by Thomas Paine — “Common Sense.”

On June 7, 1776, the Continental Congress met at the Pennsylvania State House (later Independence Hall) in Philadelphia and Richard Henry Lee, the Virginia delegate, introduced a motion calling for the independence of the colonies. Amid heated debate, Congress rescheduled the vote on Lee’s resolution but appointed a five-man committee — including Thomas Jefferson of Virginia, John Adams of Massachusetts, Roger Sherman of Connecticut, Benjamin Franklin of Pennsylvania, and Robert R. Livingston of New York — to draft a formal statement justifying the defect from Great Britain.

On July 2, 1776, in a virtually unanimous vote, the Continental Congress voted in favor of Lee’s resolution for independence, and on July 4th, it formally adopted the Declaration of Independence, which had been written largely by Jefferson. Ultimately, the drafting of the Declaration of Independence was a contentious process. After much debate over what to include and what to leave out, Thomas Jefferson, tasked with pulling the document together, envisioned a nation where “Life, Liberty and the pursuit of happiness” crystallized the very meaning of being an American. The document proclaimed the 13 American colonies’ liberation from Britain and reaffirmed their rights as free men — declaring that they were no longer subject (and subordinate) to the monarch of Britain, King George III, and were now united, free, and independent states.

John Adams wrote to his wife Abigail that July 2 “will be celebrated, by succeeding Generations, as the great anniversary Festival” and that the celebration should include “Pomp and Parade…Games, Sports, Guns, Bells, Bonfires and Illuminations from one End of this Continent to the other.”

Most Americans have never actually read the Declaration of Independence. But if it weren’t for this short but historically significant document, they may not have been able to spend the day grilling or lighting fireworks, and definitely wouldn’t have had the day off.

It’s a blast — in more ways than one. Gazing at fireworks on the Fourth is a tradition that goes back centuries. In fact, John Adams alluded to this type of celebration in a letter he wrote to his wife Abigail on July 3, 1776.

America is full of fascinating historical landmarks and sites. No matter where in the country you live, there is almost certainly a site of historical importance nearby. Some ideas could include a Native American reservation, a Civil War battleground, a government building, or a war memorial.

5 FASCINATING FACTS ABOUT THE DECLARATION OF INDEPENDENCE

WHY WE LOVE INDEPENDENCE DAY

There are few days of the year that offer as much food variety as the Fourth of July. Steak? Check. Chicken wings? Yep. Fresh strawberry pie? Absolutely. Macaroni and cheese? You got it. No matter what you’re craving, it’s sure to be available on Independence Day.

Admit it, the Fourth of July makes you feel giddy. Maybe it’s the parades, the BBQs, or, most likely, the fireworks. This is the one night of the year you can watch the sky light up, while surrounded by children laughing, dogs barking, and patriotic music playing.

That bandana you never get to wear? That decades-old T-shirt with an American flag on it? Those are all fair game on Independence Day — as long as they’re red, white, and blue.